It was pitch dark as we returned from a day of military maneuvers. This was a tactical exercise, so no lights were allowed. Days begin early in the military and all I wanted was to crawl into my pup tent and go to sleep.

The night before I had hurriedly erected my tent over a tarantula hole. We were bivouacking in tall weeds and brush. Tarantulas were everywhere. I had pounded the hole shut. Spread my poncho on the ground, since our tents didn’t have floors. Rolled out my sleeping bag and went to sleep.

We were in Puerto Rico training on a National Guard base. This base no longer exists, but at that time it was tarantula paradise. Tarantulas holes were everywhere. These holes were easy to distinguish by the web that lined the holes. You could wiggle a piece of grass or stick and the entrance and they would pop out thinking it was an insect. Most ranged in size from one and a half to two and a half inches in diameter. On one hill, they were extremely thick. They appeared to be about one foot apart.

As I pulled back the flap of my tent, I was having this nagging thought, that maybe that tarantula had gotten out of his hole that I had pounded shut. One of the squad members had a flashlight. He wasn’t supposed to be using it, but as I said before, it was pitch dark.

I borrowed his light long enough to check my tent. I lifted the tent flap and shined the light inside. Setting on my sleeping bag was one of the largest tarantulas I saw while in Puerto Rico.

Was it the same tarantula that was in the hole I pounded shut, or one that just wandered in my tent? I don’t know, but one whack with my trenching tool sent it on it’s way to tarantula heaven. After that I searched my tent and sleeping bag inside and out to make certain that I would not be sleeping with any tarantulas.

Sometimes a light can be a very good thing.   I appreciated it that night, and I appreciate that since I started following Jesus, I’ve had His light, too.  His protection against the darkness and the dangers that lurk there.   We can carry a flashlight, but it’s only when we begin to follow Jesus that we see His light chase away the darkness in our lives.

When Jesus spoke again to the people, he said, “I am the light of the world. Whoever follows me will never walk in darkness, but will have the light of life.” – John 8:12 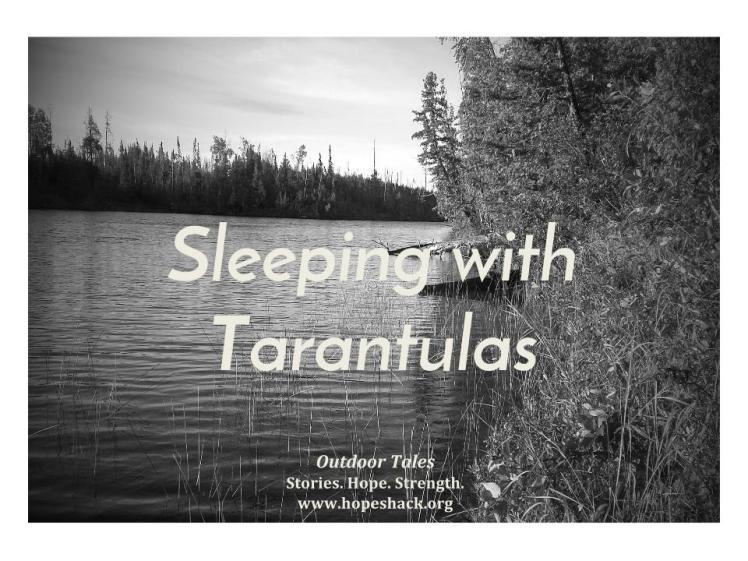 2 thoughts on “Sleeping with Tarantulas”