As I mentioned in previous stories, we live on a lake in the Hiawatha National Forest in the Upper Peninsula of Michigan. On a spring day, my wife Linda, had taken the paddle boat and was fishing along shore. She was fishing with worms for panfish and bass. She had hooked a bass about a foot long and was reeling it in when a northern pike grabbed it. The pike was about three feet long.

I was working in the garage when I heard her yelling for me to bring a dip net. She was paddling for the dock with the pike in tow. The pike amazingly still had the bass clamped in it’s jaws. She maneuvered the boat and pike close to the dock. As the pike swam near the dock, I swooped it up along with the bass into the dip net .

As I lifted it free of the water, the netting in the dip net gave away. The pike with the bass still securely locked between its jaws, splashed back into the lake and headed for deep water. Apparently the netting had rotted over the winter.

The pike, having regained new life was now putting up a good battle. Linda was trying to reel the pike back in, however now, she was at a big disadvantage. Her line ran from the paddle boat, which had drifted away from the dock, to the dock, through the hoop of the dip net and back to the pike which had headed for deep water. I held the dip net out over the water, trying to make the distance shorter, but the paddle boat just drifted farther away.

Eventually the pike gave up and released the bass. Linda was then able to reel in a very mangled bass. While she did not catch the pike, it gave us an amusing story we could laugh about later. 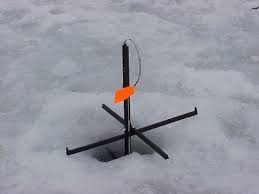 A few winters ago, my friend Dave and I snowshoed about three miles back to a lake that I had not fished for a few years. It had always been a good pike fishing lake, however the Forest Service had closed the area to all motorized traffic ,and it was rarely fished anymore. I wasn’t sure what the fishing would be like when we got there.

When we finally arrived, we immediately set about the chore of drilling holes through the ice. We would be fishing with tip-ups and using frozen smelt for bait. Smelt are small fish that run up the northern streams in the spring. You dip them at night with long handled dip nets. They make a very tasty meal.

Tip-ups are contraptions with a spool of line that is under water where it won’t freeze. You put the bait on the hook, adjust the line to the depth you want and lower it into the water. When a fish takes the bait a flag will pop up, announcing that a fish has taken the bait. A pike will take the minnow and swim off about twenty feet or so and stop to eat it. Then he will swim away. That is when you set the hook and at that point the battle is usually on.

As I was drilling holes, Dave began baiting and setting up the tip-ups. Before he had the second one completed, he already had a pike on the first one. That was the way most of the afternoon went that day. We spent most of the time running from one to the other as the pike were hitting them every few minutes. The tip-ups were placed quite a ways apart in spots that I knew to contain pike in the past. We certainly got our exercise that day. It was the only time I have experienced anything like that. We lost a lot of pike that day, but we also caught several nice ones. Most were returned to the water. We only kept a couple to eat. Even a medium size pike gets heavy after a couple miles of snowshoeing. It was a day to remember.

I have been back to the lake twice since then. Both times, fishing was poor. Whether the number of pike were down or just weren’t feeding, I have no idea. It’s about time to make another trip to find out.

A few summers back, my friend Mike was fishing for pike with his wife. He was fishing deep with minnows. Mike took his fishing seriously and that day he was rewarded. He hooked into a monster pike. He battled the fish for nearly half hour before he finally got a look at it. He had hooked into the pike of a lifetime. I have caught hundreds of pike, but nothing like Mike hooked that day. When he finally got it close enough to get a good look at it, he said it was over four feet long.

When pike see the boat, they will nearly always make one strong last run. When this pike came close to the boat, it turned and rocketed away, breaking the line in the process. Mike was devastated. His wife trying to comfort him said, “It’s alright honey, you will catch another one.” He knew how fortunate he was to have just hooked a pike of that size just once. It would be unlikely to happen again.

One spring day, I hooked into a nice pike. It put up a good fight, but I eventually worked it in close to the boat. It made a strong dive under the boat. I stuck the rod down in the water to keep the line from rubbing on the bottom of the boat. When I did that, the top section came off and slid down the line towards the pike. As if that weren’t bad enough, the pike then reversed directions and wrapped the line around the trolling motor. With a complete rod it would have been a simple matter to clear the line, but with only half a rod it was nearly impossible. I am sure my actions that day were probably reminiscing of an Abbott and Costello act.   I did finally manage to reel in the pike along with the top section of my rod.

I love fishing of any kind, but oh, how I love pike fishing!   One of my favorite Bible verses is about fishing, too.   See, many of the original disciples of Jesus were fishermen before they joined Him.

Jesus told them to come with Him, and He would teach them to fish for people.  Here’s another version of the same story.

Walking along the beach of Lake Galilee, Jesus saw two brothers: Simon (later called Peter) and Andrew. They were fishing, throwing their nets into the lake. It was their regular work. Jesus said to them, “Come with me. I’ll make a new kind of fisherman out of you. I’ll show you how to catch men and women instead of perch and bass.” They didn’t ask questions, but simply dropped their nets and followed. – Matthew 4:18-20  MSG

We can still join in and fish for people for Christ today, in order to help others find the same freedom and hope that we’ve found.   It’s really not that hard. Once we experience the peace and joy that Christ brings into our lives, it’s natural to share the stories of what He has done for us with others.   Who doesn’t love a good fishing story?  We can actually use our own stories to help others find hope,  get to Heaven, and spend eternity with the Lord.  Now that’s good fishing!

One thought on “Northern Pike Stories”