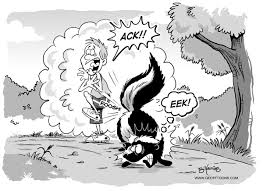 Many years ago when I was much younger, I would trap fur in the late fall and winter. I trapped coyote, fox, raccoon, beaver, muskrat and mink. I enjoyed trapping, it was another way to extend my time outdoors. It was also a way to supplement my income.

A downside of fox trapping was that you would occasionally catch a skunk. There is just no good way to remove a skunk from a trap, without encountering some skunk smell. Even if you shoot them without their spraying, their muscles will relax and out will come this most unpleasant aroma.

I had a friend, Clark, who also trapped. When Clark was a teenager, his uncle told him that if you picked a skunk up by the tail so that its hind feet was off the ground, it would be not able to spray. He explained that a skunk needed to brace its hind legs in order to spray.  Clark had actually tried this as a teenager. However, he was not quick enough, and the skunk managed to spray him before he had a good hold on its tail. Multiple showers and liberal applications of tomato juice (an old remedy for removing skunk smell) did not entirely remove all the skunk smell. The next day in school, his classmates kept getting whiffs of skunk smell. Clark just played along and claimed he smelled it too.

Several years later,  Clark was with me as I was checking my traps. It so happened that my very last fox set had caught a skunk. I was headed toward my truck to get the 22 rifle, when Clark stopped me, claiming he could remove it from the trap without it spraying. This I had to see.

Clark laid out his plan. I would keep the skunk distracted, while he would sneak up behind it, grab it by the tail and yank it off the ground before it could spray. Then it would be a simple matter to release the skunk from the trap. Toss the skunk one way, and we would run the opposite direction. This sounded like it could get real interesting.

From a few feet away I kept the skunk distracted. I was also in a good position to watch as things unfolded and if need be, I had a head start on vacating the premises.

Clark made two colossal mistakes that day. The first and biggest was picking the skunk up by the tail. The second was being behind the skunk when he did it. That day, Clark rode home in the back of the truck, even that was too close, as far as I was concerned. Clark later stated that his uncle had lied to him. He had been set up. Apparently, his uncle had a good laugh when he heard that he had actually tried picking up a skunk.

For months afterwards, when I would be around Clark, I would start sniffing the air and innocently ask him, “do you smell a skunk?” I thought it was hilarious.

It had been many, many years since the skunk episode, but a couple years ago as him and I were fishing, I remembered the incident and I just couldn’t resist the urge.

I began sniffing the air, and nonchalantly asked, “Clark, do you smell a skunk?”

“Do you feel like going swimming?” He shot back. — Yep, he still remembered.

Just like the old saying goes, ‘if you play with fire, you will get burnt’. Well, if you mess with a skunk, you’re going to get the smell on you.

The same goes for sin. We yield to temptation. Just this one time, we tell ourselves. Nobody will find out. Nobody will get hurt.

It is never that simple. People do get hurt. Our conscience condemns us. We feel ashamed. It eats away at us. Sin leaves its mark on our very soul.

Fortunately, it is never too late to seek Christ’s forgiveness and have our slate washed clean. As white as snow. At some point in our lives, we all need or have needed a fresh, clean, new beginning. Jesus is waiting, we just need to ask and we can begin a fresh new life with him.

“Come to me, all you who are weary and burdened, and I will give you rest.  Take my yoke upon you and learn from me, for I am gentle and humble in heart, and you will find rest for your souls.  For my yoke is easy and my burden is light.” – Matthew 11:28-30 NIV

2 thoughts on “A Skunk Tale”