My name is Scott, and my story is a story of ugliness, brokenness, unworthiness. It is a disgraceful story of God’s beautiful grace.

I’ve heard it said that for a drug addict who does not seek recovery, there are three ways out: ironically they’re all ins-: insanity, incarceration, or in the grave. I know I danced pretty close to the edge of all three in my teen years. I sampled more than a few mood-altering substances during that time, but I found my dance partner in crystal meth. She was my drug of choice and I fell head over heels for her. For nearly three years, during the time of life I should have been flirting with pretty girls and dating, finishing up high school and prepping for the real world, I was a hell-bent meth junkie. But here I am, relatively sane, free, and a helluva lot healthier than I was at 17-, 18-, 19-years old. Healthier physically, mentally and spiritually.

I probably sidestepped jail-time 4 or 5 times, usually with plenty of evidence to put me away. I know I sat in back of a police car far more times than I’d ever want to admit to my teenage son, Andrew. In retrospect, I can imagine God saying, “Really Scott? Again?” and working out the details of my inexplicable release. My buddy and I did spend one night in jail – for shoplifting brownies at a grocery store. It was stupid. We were stoned. We were stupid. I remember being scared to death, the bright lights of intake, the brute and scary faces, and everything so loud. During the processing, after fingerprints, the intake officer rolled up my sleeve, looked at my arm and asked, “Donate blood today?” and rolled his eyes when I nodded yes. 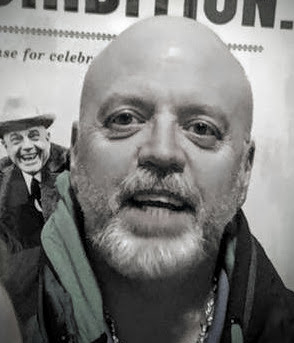 Obviously I’ve stepped away from the grave, but there were many times when I joked to my buddy that I probably wouldn’t make it to my 18th birthday. And we’d laugh and both say, “What a way to go!” Many nights I did enough meth for 6 or 8 people – in one shot. I can remember lying on my apartment floor, listening to Zepplin or Hendrix and feeling my body bounce off the carpet because of my pounding heartbeat. The thought would cross my mind, I wonder if I should call an ambulance. But that would open a big bag of pissed-off cats and I didn’t want to go there. Somehow, the day always dawned with me still alive. And prepping another shot for my day at work.

This was during the early days of the AIDS crisis and my buddy and I occasionally shared needles. How and why I survived this time, God only knows.

I don’t know for sure what insanity looks like, but I have a pretty good idea what it feels like. Toward the end of my meth run, I went through a period of amphetamine psychosis, when I didn’t trust my best friend, couldn’t hold a job, and alienated a lot of my other friends. I was also seeing things that weren’t there, thinking things that weren’t true – it was a bad time. We were living in a rundown pay-by-the-week motel, spending what little extra money we managed to keep in our pockets on cigarettes and Pepsi, occasionally food. And then one blessed day, God gave me a moment of clarity and whispered in my ear, “Call your mom.” I did and I left that world behind forever.

So I survived the 3 “Ins-” of addiction. I’m a successful husband, father, employee, even marathon-runner. I survived the dark night of my life story and came out alive and shouting: Woohoo – I’m great!

The saddest, most despicable part of my story is that, while I wanted to blame my absent father or my abusive stepfather or my flighty mother or anyone else but me for pushing me into that life, when I finally cleaned up and got out of it, I wanted all the credit. I spent years, no decades telling myself, “Yeah, that’s right. I kicked meth – without treatment or prison or Narcotics Anonymous. I did it on my own.”

But one day, about 13 years ago, I realized the truth: I didn’t do it. God had covered my butt every step of the way. He kept me out of prison, out of a mental institution, AND out of the graveyard. He must have plans for me, though I’m still not sure what they are. I suspect He wants me to be a model, an inspiration. I have been told a few times that I have inspired people. I thought at one time it was just for Andrew, but I suspect it’s for a bigger target. Which is why I am willing to share this disgraceful story of God’s beautiful Grace.

I do know this: I am here – a husband, a father, a grandfather, a friend – only by His Grace and His Mercy. I have learned to listen when God whispers in my ear. It has saved my life before.

What is it you’re facing?  Nobody goes into battle alone.  We can stand with you.  Let us know in the comments below how we can pray for you, and find hope in some of the resources we offer here.

6 thoughts on “Only Three Ways Out”